A downloadable visual novel for Windows, macOS, and Android

Best Wishes is a romance-adventure visual novel about a young, hot-blooded elf attempting to get her crush a present in the wake of his oncoming birthday. Unfortunately, Kree is an idiot, so this may (definitely) be far, far harder than she expected it to be.

This game is a demo with numerous placeholder assets created for NaNoRenO-17. It is, by no means, a finished project.

The WIP thread on Lemmasoft by clicking here!

View art and progress posts at the devblog by clicking here!

In the mountainous nation of Fyrholde, strength is respected above all else, and no pursuit is held in more esteem than that of glorious battle. The long nights and brutal winters foster close-knit communities, and such is true of Astrid's Oathbound, a unit of warriors who share a feasting hall affectionately known as the Attyrhus. Their work is, on the whole, simple - Fyrholde is filled with threats ranging from dragons to petty bandits, and for a fee, Astrid's Oathbound will... eliminate problems. Violently.

It's not a glamorous life, or a particularly easy one, but they all seem happy enough.

Of course, not every day can involve conquering a beastly foe, though today certainly feels like that for Kree, a young elf from the southern Sylphlands who has, through mysterious circumstances, come to make Attyrhus her home.

Kree is good at many things. Screaming a lot! Brewing potions! Punching bears! But when she learns that tomorrow is the birthday of the man she's secretly in love with, Kree finds herself honor bound to acquire a present and celebrate his existence in the Fyrish tradition... which is something that's much more easily said than done, given that Kree's skillset basically ends at scholastic dismemberment.

Not that she'd ever let that stop her. Kree is, if nothing else, determined, which may very well land in more trouble than she bargained for. Our delightful protagonist. She very obviously is foreign to Fyrholde, but she refuses to be shamed about anything regarding her character and prefers punching things to talking about the odd circumstances that landed her there in the first place. She squanders away her profound wizardly talent by using it to make herself really, really good at fistfights, and while most people see this as cheating, it's hard to chastise someone who's punched out a bear. She's very desperately in love with Folke, and considers him a dear friend. It doesn't matter if her affections are forever unrequited. Seeing him happy is all she can really ask for in life. The birthday boy! Well, almost. Folke is Attyrhus' blacksmith, though he's insecure about his abilities, seeing himself as a meager replacement for his fabulously talented (but ultimately deadbeat) dad. Not that he'd let that show! He's the pinnacle of reliability and he's fabulously kind, which is a good part of the reason Kree has fallen head-over-heels for him. It helps that he's remarkably patient and lets her babble about whatever latest curiosity has taken her fancy.

He doesn't particularly care much that it's his birthday tomorrow. Kree takes this to mean that she needs to go 200% in caring for him. Briar was born in the south, explaining the comparative strangeness of her name. She's a ward of Ranveig, the honorary leader of Astrid's Oathbound, who came into his company after a traumatic incident that left her sans a pair of hands. She's since acquired a pair of replacements constructed from salvaged dwarven technology, magic, and medieval hot-glue, which she has used to become very, very good at making sure nothing ever gets near her hands again.

Her most notable traits are her even temper and regal demeanor. Briar looks the part of a holy paladin, and boy howdy, does she hate the forces of darkness. While Kree doesn't care much one way or another about demons, zombies, and necromancers, she thinks Briar is pretty gosh-darn cool and will gladly follow her into battle. Today, she's going on a trip to a dwarven ruin to find replacement parts for her hands. This may or may not get bungled up by Kree. Succinctly put, Ulfr is a jerk. A big, massive, I don't like you because you're different from me jerk. He and Kree have a very tense relationship that started when his first words to her were an insult about her height, and her response involved punching him in the face. He's also one of those 'charge in and think later' types, which should endear Kree to him at least a little bit, but he also seems to think books are the work of the devil so, y'know.

Not really on great terms with the local wizard, even though Kree isn't a particularly... austere one.

He can, occasionally, be kind of nice, particularly when it comes to Folke, a man he holds in pretty high regard. That might be why he's amenable to the idea of helping Kree pick out a present in keeping with Fyrish tradition. Whether or not Kree accepts, and whether or not they can refrain from trying to kill each other for two seconds is... up in the air.

i enjoyed the demo a TON! it was genuinely well-written and really interesting. im excited for the full version!

Thank you so much for the lovely feedback! I can't wait to be able to work more on the game; I've been pretty busy with my education. Luckily though, I've been learning things and making assets that I'll hopefully apply to make the game look better artistically! It really is nice to know that you like it, despite the lack of polish and the incomplete nature of the storylines. ^^

i'm really happy to know you're still planning on finishing it! i'll keep an eye on any future works of yours for sure.

oh oh!! these are so much better wow

so CUUUUUUTE!!!!! can't wait for the full version

Thank you! I'm working hard to get this out on a reasonable timeframe. :) I have a lot of cool twists and turns planned, along with a lot more cute scenes!

and erm i know this is abit silly and honestly i'm not sure how to describe how to do anything about it but the backround colours kind of mess with my eyes? obviously not a problem for all people haha i wear glasses when playing games and such cuz certain colours bug my eyes XD but that's just me oh woe . XD excuse my nerd rambling

The backgrounds are super not final. You can see more finished versions of some of the BGs on my devblog here.

Hopefully those mess with your eyes a little less.

Oh my word! This is so amazing! I know there's placeholders and it's a demo, but what you achieved is awesome :D The sprites are beautiful (Kree's expressions, particularly, make me chuckle), and I love the style.

It really feels so fresh, and unlike any other VN I've played.

Thank you so much for the kind comment! Another person is added to the Briar camp. I definitely can't really disguise how much I favor her, haha. She just doesn't hesitate to do cool things, and she's level-headed enough to be comforting while being reasonable enough to allow for some amounts of fun.

I'm glad my work feels fresh rather than weird. That's always been a concern of mine; I have absolutely zero interest in churning out high-school slice of life games, and I can't, even when I try really, really hard, make anything that anyone would consider normal. So, I sometimes think to myself, 'what if everyone thinks it's too weird? what if no one likes it?' I was a lot more anxious about it when I was younger, but it still kind of plagues me to this day. But! Make the kind of game you want to see more of in the world, right?

I'm sure you can understand, since your works all take place in interesting and unusual settings.

I actually just made a development blog for my games, so if you're interested in following my progress on a medium other than lemmasoft, here's the link!

I haven't played it yet, but off the bat the Strange Woman's dialogue in the screenshot is cracking me up... CARRY MY BODY TO THE GRAVE, BRIAR. My hero.

To be quite honest, that character is my favorite to write. She has so much shade to drop whenever you die.

Briar is a pal. She'd get you a dope-ass grave with a nice headstone and she'd totally think of something cool and somber to put on it. I'd definitely want her to speak at my funeral. 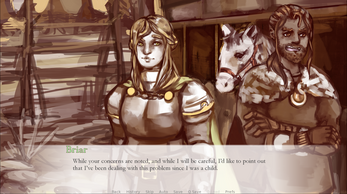 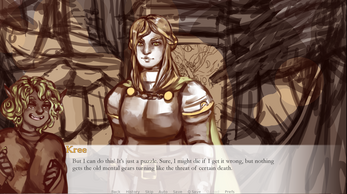 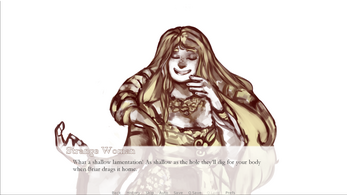 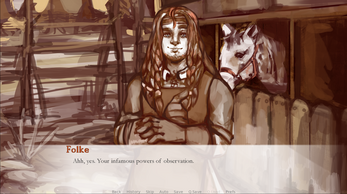